My first year of college I attended Lee University; it is a private Christian University consisting of about 5,000 students nestled in the mountains in Tennessee. Lee University offers outstanding academics and has one of the most beautiful campuses that I have ever been on. The atmosphere there is absolutely electric, and the people are extremely nice. On a surface level the university seems flawless. However, life at Lee is not as perfect as one is lead to believe, and as with every university it has its flaws. Most of my “Life at Lee” consisted of dating the same girl, taking religion classes, going to chapel, participating in intramural sports, and ultimately staying inside an innocent little bubble. The culture there constituted that we were to only think in a Christian worldview. The endless required chapel sessions, religion classes, and recommended Monday night small group gatherings did not give one the opportunity to break through the bubble that encompassed the campus. Now things were nice and peachy if you were a dedicated Christian, but what about the people that attended the school who were not religious? They were, and probably still are, treated as outcasts. This happened to be the case for a lot of the international student athletes that I met. The fact that they were not “believers” caused others to avoid them in many regards, but it also caused them to form tight knit groups. They were only at Lee because they had been offered athletic scholarships to compete for the university. Apparently though, the coaches had not taken the time to explain how different the school was compared to most other American colleges when recruiting their athletes. The student athletes, especially the ones from abroad, envisioned their college experience to be full of parties and new experiences. However, when they arrived on campus they were met by a whole new reality: the college that they were recruited to is hardcore Christian. The combination of studying in a foreign place and being surrounded by religion can cause some hard-hitting culture shock. This being said, most of the international student athletes on campus tended to stick together and be rowdy. They would openly state how they thought Christianity was stupid and this offended a lot of people at the university. I don’t blame them though because if I was in there shoes I would have acted out as well. The international athletes were surprisingly cool guys though if you got passed the whole “they’re not religious” thing. They had a lot to offer, one just had to be willing to hear them out.

Below: A snowy day at Lee University with the flame still burning strong.

I was a strong Christian for most of my time spent at Lee University, and with my Christian views at the helm I put up relational barriers towards the international athletes that I met. They came across as a threat to my faith because they openly disagreed with the foundations that I was raised on. It scared me to hear their points of view for some reason. Maybe I was afraid that I would actually agree with their viewpoints, or maybe I was just afraid of being judged by other Christian students at the University for associating with them. What I do know is that I am grateful for getting to know some of them in the end.

At the conclusion of my freshman year at Lee University I connected with the international students on my hall. They were all student athletes who came from many different backgrounds. Their stories were the complete opposite of mine: they hailed from all over the world, they were all collegiate athletes, and none of them were remotely religious. Each difference that they exemplified was something that I wanted to explore. I desired to travel outside of the South and see the great big world, I was currently working my ass off to become a collegiate tennis player, and I was starting to fall off the whole religion train that I had been on my entire life. I got to know them my last few weeks at Lee University because I finally decided to let my barriers down. It was one of the best decisions that I could have made.

Below: Me with Eirik (A former tennis player at Lee from Norway on my hall) after he accidentally hit me in the nose with the cue ball. 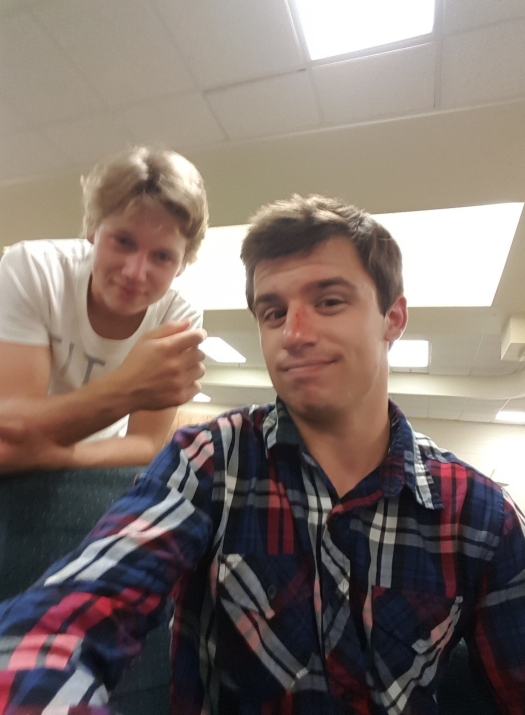 My last few weeks at Lee University were extremely eye-opening as I began to spend quality time with the international athletes on my hall. Hanging out with the international athletes from my hall allowed me to see the University from the other side and I got a glimpse of the underlying counterculture that existed at the school. This culture consisted of parties, speaking one’s mind, having fun, and ultimately being free to explore new possibilities. So, I began to try new things; I started to view the school from a “worldly view” rather than a Christian one, listened to new outlooks on life, met new people, talked to new girls, and even attended a party or two. It was exhilarating to explore this new way of life towards the end of my freshman year. The international athletes on my hall gave me new perspectives on how to view the world, taught me about their cultures, introduced me to their native languages, exposed me to incredible music, and most importantly sparked in me the desire to travel. I had been introduced to many different cultures and I was thirsty to know more about everything else that awaited me in the great big world. I desired to travel and see amazing places with my own two eyes. It turned out that traveling would become a present-day example of me Doing What I Love.

Be on the lookout for part two coming soon!